The year 2020 has been one of unexpected change and it has been no different for the maritime space . . . The most recent wave of change came in the form of a proposal to the IMO from Trafigura introducing a carbon levy of between $250 per metric ton (/mt) and $300/mt of CO2 equivalent on shipping fuels . . . In 2019, there were about 7,400 crude oil tankers in use globally, of which only about 175 of them are LNG-fueled vessels (just under 2.5%). The Trafigura proposal would impact 97% of the oil tanker fleet and give any owners or charters of LNG-fueled vessels a significant competitive advantage in the market.

Waves Of Change: Assessing The Potential Impact Of A Carbon Levy On Shipping Costs

There are “very long waiting lists at some shipyards,” particularly in China, for installation of scrubbers on vessels to ensure compliance with IMO 2020 marine fuel regulations, a leading scrubber technologist said this week. “Scrubbers are made to order and the standard lead time is six months,” Sigurd Jenssen, a director at Wartsila Corporation, a Finland-based marine technologist. Even though the IMO first announced in 2008 that it planned the sulfur cap, scrubber orders from shipbuilders, owners and operators started to be received only in 2017 for newbuilds and in 2018 for installation on existing vessels, which has resulted in a flurry of orders in the run-up to the deadline, according to Jenssen. Jenssen estimated that between 3,000 and 4,000 vessels have already ordered scrubbers — including orders already processed — approximately just 10% of the applicable fleet of some 40,000 heavier vessels worldwide that would normally use HSFO.
hellenicshippingnews.com

US sanctions against Chinese tanker owner COSCO (Dalian) were announced on September 25, setting charter rates into a frenzy. Daily asking prices exploded to some $300,000/day, but despite tankers now being chartered at just under $100,000/day, this is still 250% higher than May-June. This affects the price of crude to the refinery, so it directly affects the price of LSFO and puts pressure on the floating storage off Singapore making it more expensive and means traders will quickly try and get rid of it. On November 1, Platts announced IMO 2020 ship indexes that enable the reader to see differences in costs between LSFO vs HSFO-fueled bulk vessels. Using the spreads reported by ICE (Intercontinental Exchange), it’s currently cheaper to operate a vessel on HSFO. However, that excludes the costs of installing the necessary scrubbing equipment on each ship. And, let’s not at all forget the wash water impact to our oceans. In retrospect, it can be the most important small yet big thing we are not focusing enough on. At first glance, HSFO and scrubbers is proving to be the smart decision at the moment, given Platts Nov 1 price differential between 3.5% and 0.5% sulfur fuel, the daily hire spread was $4,302 on the China-Australia and $5,374 on the China-Brazil. There is no reason to assume the spreads will be substantially different for a Mega/Ultra-Mega sailing China-N. Europe.
hellenicshippingnews.com

According to industry analysis seen by the Guardian, between 2,300 and 4,500 ships are likely to install an exhaust gas cleaning system known as a scrubber to meet the regulations on low-sulphur fuel instead of buying the more expensive clean fuel. The scrubbers allow ship owners to continue buying cheaper high-sulphur fuel, which is washed onboard in the scrubber. In the case of the most used system, known as open loop, the waste water is discharged into the ocean. Although expensive at around $2-4m per ship fitting, the cost of buying and fitting a scrubber would be recovered in the first year, the industry analysis says.Cleaner low-sulphur fuel is likely to cost between $300 and $500 more a tonne, according to analysts.Ned Molloy, an independent shipping analyst, said that although the scrubbers were allowed by the IMO as a way to meet the lower-sulphur emissions rules, they were little more than an “environmental dodge”. Molloy said the scrubbers that had so far been fitted on the global fleet in advance of the 2020 deadline were mostly open-loop systems, which discharge into the sea, rather than the more expensive closed-loop systems, which require storage of waste water to be discharged into a facility on shore. “There is growing concern, particularly in EU countries, about whether open-loop scrubbers should be allowed.” 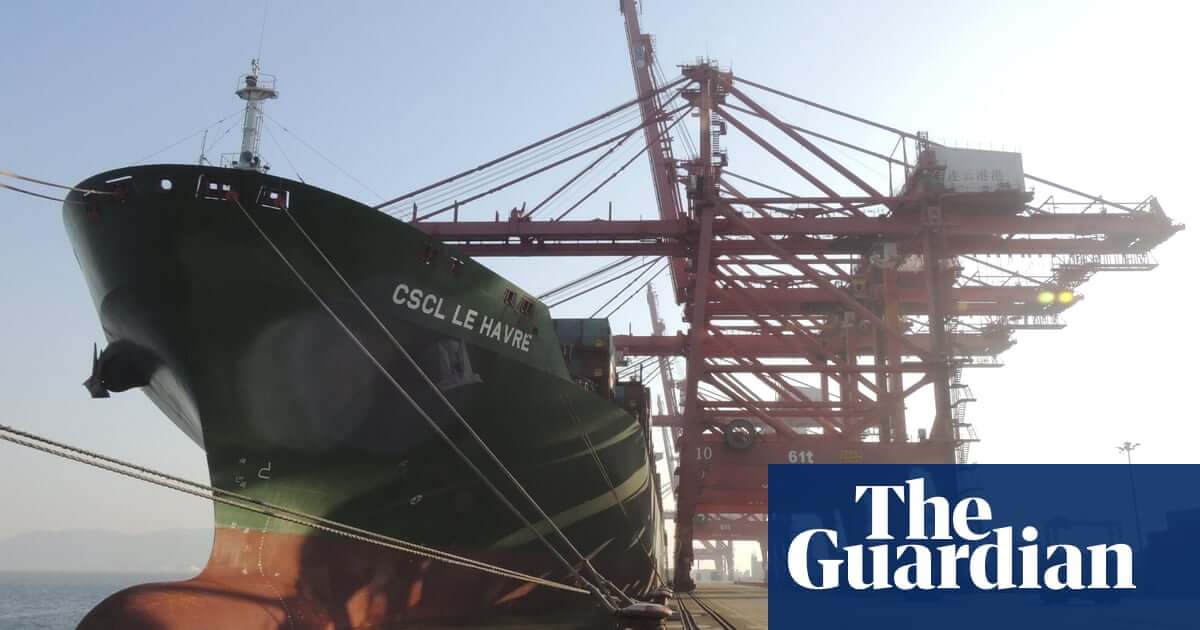 There are approx. 15k ships that are Large or Very Large (25,000 GT or higher) and under 15 years old in the world. According to calls with industry analysts, ships burning more than 50 metric tons of fuel per day are the primary candidates for marine scrubbers given the high upfront initial capital outlay ($3M - $5M). Ships burning less than 50 metric tons of fuel are likely to switch to LSFO at the given spreads (calculus may change if LSFO becomes very costly). Of the 15k ships, approx 3k have installed scrubbers, leaving 12k yet to install scrubbers. With 15-20% market share for closed loop scrubbers and another 100 new builds a year, we estimate the market for closed loop scrubbers to be 2.5k ships for the next 5 years.

With IMO 2020 which reduces the allowable sulfur content from 3.5% to 0.5% as of Jan 2020, ships will either have to switch to low-sulfur fuel or install scrubbers. Derek Novak, Senior Vice President of Engineering and Technology and the American Bureau of Shipping, explained at the forum that the total adoption of scrubbers as of October 2018 amounted to 1,509 units, with 665 to be installed on newbuild vessels and 844 to be retrofitted. Novak expects that a total of 2,000 to 3,000 vessels will be outfitted with scrubbers to comply with the new regulations. Assuming the total merchant marine fleet amounts to close to 60,000 vessels, those 2,000-3,000 scrubbers make up only 3%-5% of the entire fleet. 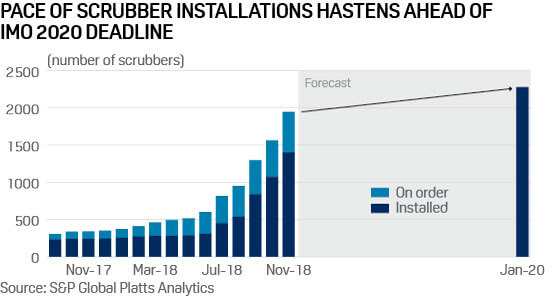 Scrubbers under scrutiny by maritime industry as IMO 2020 nears

Around 16% of the ocean carrier global fleet – equating to 36% in terms of teu capacity – will be equipped with exhaust gas cleaning scrubber systems to comply with the IMO 2020 0.5% sulphur cap, according to Alphaliner. “With the cost of scrubbers falling rapidly, to just $3-$5m a unit compared with $5-$8m a year ago, the scrubber option has become more attractive for owners.” It noted that several carriers, including Maersk Line and Hapag-Lloyd, which had initially expressed doubts over the use of scrubbers, had “changed their minds”.
gcaptain.com
0
0
0
0

3,694 scrubbers have been installed or on order to date. Of those 65 are closed loop while the remaining are either hybrid or open loop systems. Wartsilla, Yara Marine, and Alfa Laval have installed ~1,400 of those scrubbers. LiqTech has a framework agreement to be a supplier of membranes to those 3 manufacturers.

The fuel that ships currently use literally comes from the bottom of the refining barrel. The new rules, adopted in 2016 by the International Maritime Organization, or IMO, an agency of the United Nations, mandate that the maximum sulfur content in marine fuels be reduced to 0.5% from 3.5%. A 2016 study by the Finnish Meteorological Institute predicted that the rules could extend the lives of 570,000 people who would have died prematurely from 2020 to 2025. It is an enormous shift, affecting as much as 5% of global oil demand. And it won’t come cheap. The dirtier fuel costs roughly $325 a ton, while one kind of compliant fuel goes for $600, according to IHS Markit. And that spread could widen further once the deadline passes. IMO 2020, as the new rules are called, could cost the shipping industry $60 billion a year to put into effect, according to energy research firm Wood Mackenzie. Assuming full compliance, the total cost of the regulations could be as much as $240 billion, Goldman Sachs estimates—with much of that cost eventually borne by consumers. Those costs will first fall on shipowners. They can switch to cleaner marine fuels, install “scrubbers” that can reduce emissions from sulfur-heavy fuel—or try to skirt the regulations. Evading detection could prove difficult, however. The IMO has broad authority to set rules for international shipping, and countries around the world are expected to enforce compliance.Despite the costs, some investors expect certain shipping companies to benefit from the changes. Those that install scrubbers, for instance, can run their ships on sulfur-heavy fuel oil, which will probably get much cheaper once other shipowners are forced to buy low-sulfur blends. 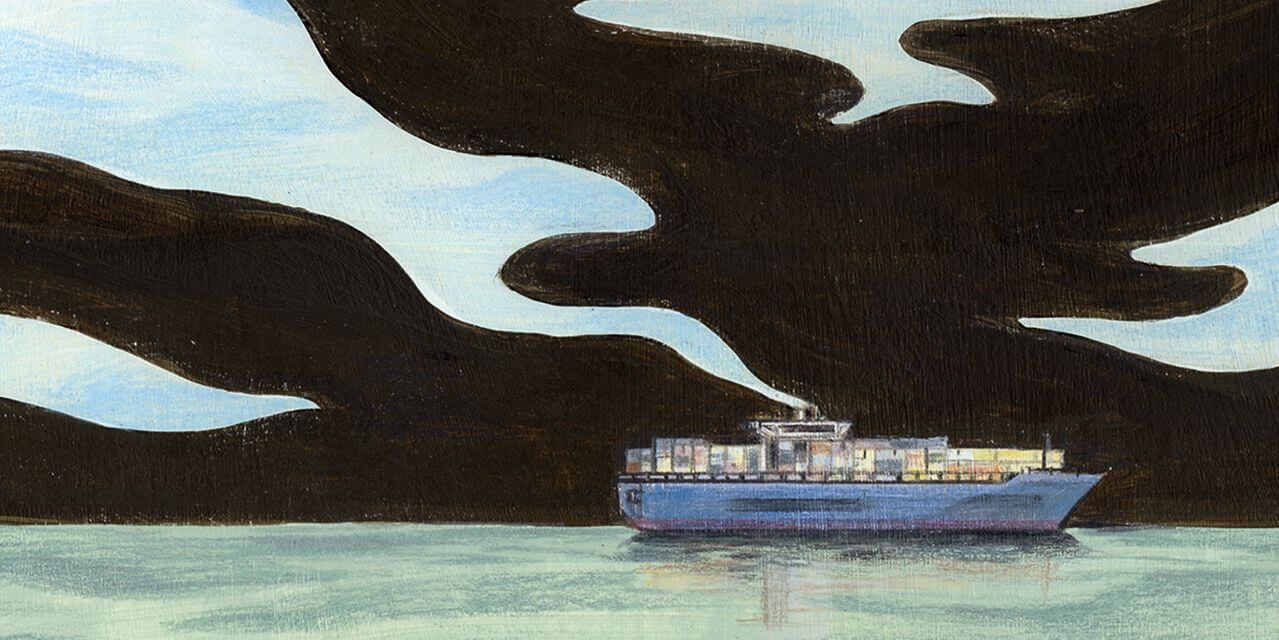 Shipping Fuel Is About to Get Cleaner. What It Means for Investors.